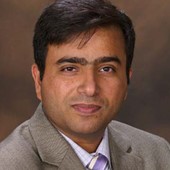 Pinkus Dermatopathology Laboratory, a Sonic Healthcare dermatopathology practice is privileged to include Liaqat Ali, M.D., as a member of our medical staff. Dr. Ali brings with him a wealth of knowledge indicative of his extensive academic background.

Dr. Ali received his medical degree from the Nishtar Medical University in Multan, Pakistan. He subsequently trained at the Aga Khan University Hospital in Karachi, Pakistan, where he received the award for best academic resident activities. He then relocated to the United States for his postgraduate training.

Dr. Ali is a member of five professional medical organizations, such as the American Society for Clinical Pathology and the College of American Pathologists. He holds full medical licensure in nine states, including Georgia, Michigan, New York, and Virginia. He is board-certified in dermatopathology and anatomic and clinical pathology.

Dr. Ali has had the results of his research efforts published as abstracts and articles in peer-reviewed medical journals. He has also delivered many oral and poster presentations at professional medical conferences.